Spread throughout New York City your will see these bikes painted all white, locked to a street sign, in many cases decorated with flowers.

What are these bikes doing here?  They are ghost bikes and serve as a grave reminder of where a bicyclist or pedestrian spent their last moments on this planet.

This unique memorial comes complete with a symbolic gravestone memorializing the victim of a bicycle accident, many times not reported in the media or charges being brought against those negligence or criminal acts have ended someones life.

The history of ghost bikes goes back to the first one created in 2003 in St. Louis Missouri.  Here in New York City, there are over 150 ghost bikes installed which represents the largest number of installed bikes in the world.  Currently there are over 210 ghost bike locations throughout the world that serve as a reminder and advocacy that cyclists’ have a right to safe travel. The same holds true for pedestrians.

Since the inception of the ghost bike program in 2003,  there have been memorial rides where cyclists unite and tour New York City visiting ghost bike sites.  I’ve participated in several memorial rides and have paid my respects to the fallen bicyclists.

As a bicyclist that has ridden over 3,000 miles every year since 2014, these memorials have always hit home for me.  I look at all the victims as my brothers and sisters whose lives were cut short.  Sometimes the loss of life was caused by an accident, but in many cases the deaths were senseless.  Whether it be by a drunken driver, someone fiddling with their phone, not paying attention to cyclists, or rushing to beat that red light, many of these deaths were unavoidable. 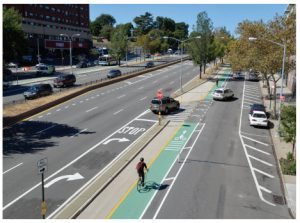 Fortunately in New York City, one of the largest cycling cities in the world, there are more bicycle lanes as part of the initiative known as Vision Zero. The term, which originated in Sweden in the 1990s, urges us to stop accepting traffic fatalities as inevitable, and to instead work toward building a world in which no one must risk their life simply getting from point A to point B.

In New York City, traffic fatalities in the city have been reduced by 22 percent since being enacting in 2014. There are over 30 miles of protected lanes throughout New York City part of the total of an overall total of 1000 miles of bikes lanes.

With proper planning you can pretty much plan a route to get you anywhere in the city and completely avoid street traffic making it much safer.  Now if we can keep taxi’s and cars out of the bike lanes, it will only become safer.  You can see an online map of bike lanes at NYC Bike Maps

This entry was posted on Tuesday, July 5th, 2016 at 2:18 pm and is filed under Blog. You can follow any responses to this entry through the RSS 2.0 feed. You can leave a response, or trackback from your own site.

This site uses Akismet to reduce spam. Learn how your comment data is processed.